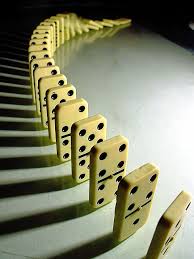 Our scripture is II Timothy 2:1 through 3:

You therefore, my son, be strong in the grace that is in Christ Jesus.  And
the things that you have heard from me among many witnesses, commit
these to faithful men who will be able to teach others also.  You therefore
endure hardship as a good soldier of Jesus Christ.

II Timothy was written at the end of Paul’s life “…to Timothy, my true son in the faith…” (I Timothy 1:2).  From this phrase we understand that the Apostle led the young man to faith in Jesus, probably on his and Barnabas’ first missionary journey (see Acts 14:1-26).  About 20 years had passed, and Timothy had grown in his Christian faith and was assigned by Paul to pastor the church at Ephesus.  So the old apostle – knowing his life was about to end by decree of Emperor Nero – encouraged Timothy to continue the string of Spiritual Dominoes in which he and Paul were part.  Paul was apparently touched by Stephen’s witness in Acts 6:8 through 7:60.  He then influenced Timothy, who in turn was to “…commit [Christian teachings]…to faithful men who will be able to teach others also.”  So there are five Spiritual Dominoes implied in these verses from II Timothy 2, and the string continued with many more faithful witnesses!

We have looked at another string of Spiritual Dominoes that started with Edward Kimball, the Sunday school teacher who led 18 year old Dwight L. Moody to Christ.  Moody then inspired F. B. Meyer, who in turn led J. Wilbur Chapman to the Savior.  Moody also helped Chapman come to assurance concerning his salvation.  But there are four more Dominoes in this Spiritual string…

•      Billy Sunday – J. Wilbur Chapman, whom Moody once called the “greatest evangelist in the country,” hired an advance man in 1893 to help set up his crusades.  Billy Sunday was a baseball player with three major league teams in his career – the Chicago White Stockings, the Pittsburgh Alleghenys and the Philadelphia Athletics.  Converted at the Pacific Garden Mission in Chicago seven years before Chapman hired him, Sunday increasingly felt God’s call on him to preach.  Chapman, who was educated and refined, coached the rough and tumble Sunday in his theology and preaching.  And when in 1896 Chapman again returned to the pastorate, Billy Sunday struck out on his own.

Over the next almost 40 years, William Ashley Sunday became the most famous and effective evangelist up to that time!  It is estimated that he preached to over 100 million people with a million and a quarter “hitting the sawdust trail,” as the fiery evangelist called coming forward in the tents and tabernacles where he ministered which had sawdust-strewn floors.  His style was unlike anything ever seen!

Sunday gyrated, stood on the pulpit, ran from one end of the platform to the
other, and dove across the stage, pretending to slide into home plate.  Some-
times he even smashed chairs to emphasize his points.  His sermon notes had
to be printed in large letters so that he could catch a glimpse of them as he
raced by the pulpit. (Wikipedia article on “Billy Sunday”).

•      Mordecai Ham – In 1934 Billy Sunday was invited by a group of Christian business men to hold a second campaign in Charlotte, North Carolina.  But Sunday wasn’t available, so he recommended they call Mordecai Ham.  Ham came and began the revival meetings in October of that year.

Despite racist and anti-Semitic leanings, Kentucky-born Mordecai Fowler Ham, Jr. became a nationally known and effective evangelist from 1900 through 1941.  To begin his crusades, he would go after the worst, most hardened sinner in town.  The following is from a website, www.evanwiggs.com/revival/portrait/ham2.html:

A typical story is that of Ham seeking out the most notorious sinner in a Southern
town.  Ham was directed to a certain cornfield.  The infidel saw the feared preacher
approaching and went into hiding.  The evangelist began to hunt his prey and, hear-
ing suspicious sounds under a cornshock, hauled him out.  “What are you going to
do with me?” the atheist quavered.  Ham retorted, “I’m going to ask God to kill you!
You don’t believe God exists.  If there is no God, then my prayers can’t hurt you.
But if there is a God, you deserve to die because you are making atheists out of
your children and grandchildren.”  As the infidel begged him not to pray that way,
Ham said, “Very well then, I shall ask God to save you.”  He was saved, and before
the meeting was over, all of that infidel’s family was baptized – forty of them!

In 1936 Ham started regularly preaching over the radio, establishing the “Kentucky Home Evangelistic Network” in 1941.  Through his 25 year radio ministry, Ham reached many millions, especially across the south.  The number of people saved through Ham’s radio ministry is unknown.  But the official count of his crusade conversions stands at 303,387.  One conversion stands out!  On November 1st, during the 1934 Charlotte, North Carolina crusade, Just six days short of his 16th birthday, Billy Graham came forward to receive Christ as his Savior!

We will continue with Spiritual Dominoes next Monday by examining the next Domino in this amazing string that started with an unknown Sunday school teacher more than 160 years ago!