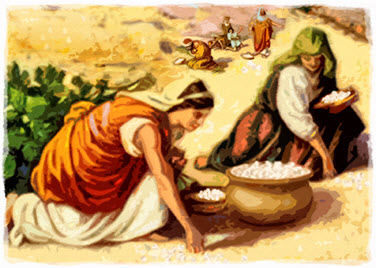 Our featured Scripture is Exodus 16:13 through 15:

…in the morning the dew lay all around the camp [of Israel].  And when
the layer of dew lifted, there on the surface of the wilderness, was a small
round substance, as fine as frost on the ground.  And when the children
of Israel saw it, they said to one another, “What is it?”  For they did not
know what it was.  And Moses said to them, “This is the bread which the
LORD has given you to eat.”

It was called manna, which is the Hebrew word for “What is it?”  The Israelites had never seen anything like it before – nor had anyone else!  It was God-sent food, described in Exodus 16:31 as, “…like white coriander seed, and the taste of it was like wafers made with honey.”  And God gave manna in response to the Israelites grumbling against Moses and God:  “…you have brought us out into this wilderness to kill this whole assembly with hunger.” (Exodus 16:3).  He is gracious like that – even when we don’t deserve it!

There were specific instructions given in Exodus 16:16 concerning the gathering of manna:  “This is the thing which the LORD has commanded:  ‘Let every man gather it according to each one’s need, one omer [around two quarts] for each person….”  It was to be gathered every morning, for as the day progressed, and “…it the sun became hot, it melted.” (Exodus 16:21).  But manna was not to be gathered on Saturday!  The Sabbath was to be a day of rest!  So on Friday, “…the sixth day…it shall be [gathered] twice as much as they gather daily.” (Exodus 16:5).  Usually, the freshness of the manna lasted only one day.  If kept longer, “…it bred worms and stank.” (Exodus 16:20).  But because of the Sabbath, and by God’s miracle, what was gathered on Friday morning lasted two days! (See Exodus 16:23-26).

Now how do we apply this to our Christian lives?

•      In John 6:49, 51 and 54 Jesus told the Jews, “Your fathers ate the manna in the wilderness, and are dead….I am the living bread which came down from heaven….Whoever eats My flesh and drinks My blood has eternal life….”

We are to partake fully of the Lord Jesus every day!  And how do we partake of Him? By the Word of God – “Let[ting] the word of Christ dwell in you richly…” (Colossians 3:16) – reading, studying, meditating on it and obeying every day what we read in the Bible!

The Israelites had to go out and collect the manna each morning.  If they went out after the sun became hot, it melted, and they didn’t find any.  They had to do it on God’s time-table, and that took discipline.  And it also took some effort to gather it.  Do we have the discipline to set a regular time to mine God’s riches – to partake of the Lord Jesus Christ?  And are we willing to expend the necessary effort?

•      “What is it?” the Israelites asked.  For they had never seen manna before. “Angels’ food” it is called in Psalm 78:25.  Do you limit God in what He can do?  When there seems to be no other way, do you feel you have to step in to make a way?  Can your God do something to provide for you that you have never known before?  Paul writes in Philippians 4:19, “And my God shall supply all your need according to His riches in glory by Christ Jesus.”  But the apostle does not restrict how God will do it!

Do you know how much manna God had to provide for over 600,000 men, plus women and children? (See Numbers 2:32) – perhaps two to three million people?  It would take four to six million quarts of manna every day!  If the dry measure of two quarts per person weighed about two pounds, that’s two to three thousand tons of manna a day!  And He did that for 40 years! (See Exodus 16:35).  Do you really think God can’t provide for you?

It is a sad fact that too many Christians, especially in the western world, depend on being spoon-fed the Word on Sunday morning – and they expect that will be enough for the next six and a half days!  Would you eat physical food only once a week?  If you did, would you maintain your health?  Job cried out in the midst of his great trials:

My foot has held fast to His steps; I have kept His way and not turned aside.
I have not departed from the commandment of His lips; I have treasured the
words of His mouth more than my necessary food. (Job 23:12).

“…on the sixth day…gather…twice as much…[for] tomorrow is a Sabbath rest
…and lay up for yourselves all that remains, to be kept until morning.”  …and
it did not stink, nor were there worms in it.

The Israelites were commanded to keep the Sabbath as a day of rest and worship.  Would not we greatly benefit if we set aside one day out of every seven to refrain from regular work and concentrate on the things of God?  Think about it!