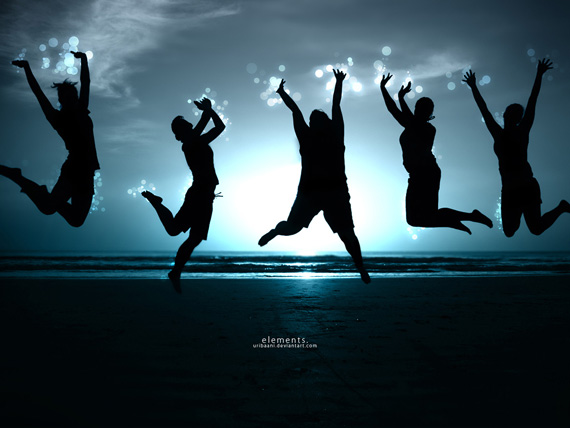 An Old Testament Scripture that shows One Anothering – the way we are to relate to one another as believers – is Psalm 122:1 through 4:

I was glad when they said to me, “Let us go into the house of the LORD.”
Our feet have been standing within your gates, O Jerusalem!  Jerusalem
is built as a city that is compact together, where the tribes go up, the tribes
of the LORD, to the Testimony of Israel, to give thanks to the name of the
LORD.

The idea this psalm conveys is that believers are a community together, worshiping with, serving, and supporting one another!  Notice the plurals that indicate the group acting together – they said to me; Let us go; Our feet; the tribes go up, the tribes of the LORD.

In the first four blogs, we have covered fourteen of the thirty-two words or phrases in the New King James Version New Testament that are associated with the term one another.  Each one shows how we are to relate to one another in our Christian faith!

•      “…there should be no schism in the body [of Christ, the Church], but…the members should have the same care for one another.” (I Corinthians 12:25).  The Greek word for care is μεριμνάω (pronounced mer-im-nah’-o).  Strong, in his Greek Dictionary, says the word means, “to be anxious about…,” and is translated from the Greek Scriptures as, “…be careful, have care, take thought.”  The phrase care for one another is set in contrast to schism in the body, the Church.  And it builds on there should be no schism.  A schism is a break, a fracture in what should be a close family fellowship of believers ministering to one another!  It is not that we should be anxious (see Strong’s definition above — see also Philippians 4:6 – the same Greek word [mer-im-nah’-o] translated as careful or anxious), but we should be ‘taking careful thought’ of how we are to keep Church family unified!

Consider the wider context concerning the same care in I Corinthians 12 and 13 – the Church is, “…the body of Christ, and [we are] members individually.” (I Corinthians 12:27).

•      “…you…have been called to liberty; only do not use liberty as an opportunity for the flesh, but through love serve one another.” (Galatians 5:13).  First, let me say that love in this verse is agape love we discussed in One Anothering – I.  This is the unselfish love that keeps on loving no matter what – the kind of love with which God loves us!  With agape love, we are to serve one another!  The Greek word for serve is δουλεύω (pronounced dool-yoo’-o).  It means, “to be a slave to (literally or figuratively, involuntarily or voluntarily)…,” and it is translated in the KJV New Testament as “be in bondage, do service, serve.”  A bond servant can be in that position involuntarily or voluntarily.  We voluntarily put ourselves in such a position to serve one another through love!

Do you remember in the blogs of June 21st and 23rd (One Anothering – II and III) we looked at John 13:14 – “If I…your Lord and Teacher, have washed your feet, you also ought to wash one another’s feet.”?  Jesus – the Lord of glory, the Son of God, God the Son – voluntarily “…made Himself of no reputation, taking the form of a servant…He humbled Himself and became obedient to the point of death, even the death of the cross.” (Philippians 2:6 and 7).  In John 13 He was taking the part of a common household bond servant, washing dirt from between the toes of His followers!  Paul exhorts us in Philippians 2:5 to “Let this mind be in you which was also in Christ Jesus….”  Think the same way Christ thought!  We are to serve one another because we love one another!  And, according to John 13:34 and 35, such loving service will be a strong proclamation to the unbelieving world that we are the disciples of the Lord Jesus Christ! (See June 19th blog – One Anothering – I)

✞      The Greek for kind is χρηστός (pronounced khrase-tos’).  Thayer’s Greek Definitions tells us it means, “…virtuous, good…mild, pleasant (as opp. to harsh, hard sharp, bitter); kind, benevolent [toward]…people.”  Paul, in Titus 3:4, says, “…the kindness and love of God our Savior appeared…” when He revealed Himself through Jesus Christ, and gave us salvation by faith in Him alone! (See Titus 3:5-7).  We should be kind to one another because God is so kind to us!  One of the nine manifestations of the fruit of the Spirit (see Galatians 5:22, 23) is gentleness.  It is the same Greek word as kindness.  And we, as Christians, need to have that quality of being kind and gentle in us by the Holy Spirit – manifesting it toward one another!

✞      The Greek for tenderhearted is εὔσπλαγχνος (pronounced yoo’-splangkh-nos).  It means, “well compassioned, that is, sympathetic….”  This word comes from two Greek words that means literally good intestines!  You see, to the ancient Jew, the seat of emotions was a lot lower than the heart of today!  But whether from the intestines or the heart, we are to show one another compassion and sympathy!  Jesus, it is recorded, performed many of His miracles because He had compassion of those afflicted with needs! (See, for instance, Matthew 9:26; Mark 1:41; Luke 7:13).  And Peter tells us in I Peter 3:8 that we are to “…be of one mind [with Christ and each other], having compassion for one another.”

✞      The Greek for forgiving is χαρίζομαι (pronounced khar-id’-zom-ahee).  The meaning is, “to grant as a favor, that is, gratuitously, in kindness, pardon or rescue….”  It is not always easy to forgive one another.  Some in the church family can deliver pretty grievous insults and hurts!  And Jesus even told us that we are to forgive “…seventy times seven…” for the same offense! (See Matthew 18:21, 22).  But remember this:  we are told to be “… forgiving one another, just as God in Christ also forgave you.”  If Jesus from the cross could say, “Father, forgive them, for they do not know what they do.” (Luke 23:34), after what they did to Him; and since He has “…forgiven you all trespasses…” (Colossians 3:13) – surely anything that we are called to forgive concerning one another is far less than what He forgave! (See the warning in Matthew 6:12, 14, 15).

On to One Anothering – VI on Friday….