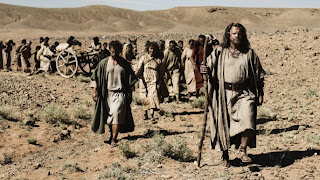 According to I Samuel 27:7, David was Dwelling In The Devil’s Dominion – the Philistine territory – for “…one full year and four months.”  That’s a long time to be out of fellowship with God!  Remember, the Philistines were inveterate enemies of Israel for centuries!  And we have been seeing how that extended stay affected David and all those who were with him – up to maybe two thousand people!  There were “…six hundred men…their wives, their sons, and their daughters…” (I Samuel 27:2; 30:2).

What effect can our getting away from God have on us and those around us?

✡      Egypt in the Bible has been used as an example of the world without God!

▸      Moses gave instructions in Deuteronomy 17:14 through 20 concerning the king the Israelites would have in the future.  In verse 16 Moses said, “[The future king]…shall not…cause the people to return to Egypt….You shall not return that way again.”

▸      Revelation 11:8 adds light to Egypt representing the heathen world.  The verse concerns the two future prophets who are identified by God as “….My two witnesses….”  Further in Revelation 11:2 we read, “And their dead bodies will lie in the street of the great city [Jerusalem] which spiritually is called Sodom and Egypt, where also our Lord was crucified.”  That’s a slam on Egypt!

✡      Although there is no direct command from God to Abraham that he should not go down to Egypt (as his son Isaac was instructed), I believe we can surmise the same directive was given to him!

▸      There is no record of Abraham worshiping Jehovah while he was in Egypt!  He built an altar before he went into that country (see Genesis 12:8), and he came back to that altar and worshiped only after he had left Egypt (see Genesis 13:3, 4).

▸      When he came out of Egypt with his family (his nephew Lot accompanied him during his stay in that country), Lot chose as his dwelling place in Canaan, “…all the plain of Jordan…well watered everywhere…like the garden of the LORD, like the land of Egypt as you go toward Zoar.” (Genesis 13:10).  His choice was made by recalling what he had experienced and loved – in Egypt!  Some years later, that place Lot chose turned into a wasteland, when God destroyed Sodom and Gomorrah! (See Genesis 18:20 and 21; 19:1 through 29).  Egypt influenced Lot’s terrible and worldly choice!

•      There is no direct statement in the Bible whether or not David worshiped (was close to) God while he was in Philistia!  But there is indirect evidence:

✡      We might assume that David did not worship Jehovah in that land because there is no mention of it either way!  It is called “an argument from silence.” but that can be a dangerous practice!  For instance, concerning infant baptism:  There is nothing directly written in Scripture (and little inference) that supports the practice of it – or condemns it.  So many practice and promote it because of Scriptural silence!

✡      There are apparently no Psalms written by David during his time in the land of the Philistines!  Although the Blue Letter Bible website – https://www.blue letterbible.org/study/parallel/paral18.cfm – suggests that Psalms 16 and 141 were written when David was considering fleeling to Philistia, nothing is definite in several other internet searches.  Although David is called “…the sweet psalmist of Israel…” in II Samuel 23:1, a thorough study of his life reveals that of the 150 psalms, David wrote 75 of them!  But none of his psalms were written when he was away from the Lord!  The same occured during another time of unconfessed sin – concerning Bathsheba and Uriah (see II Samuel 11:1 – 12:12).

Jesus said in Matthew 6:24, “No one can serve two masters; for either he will hate the one and love the other, or else he will be loyal to the one and despise the other.”  He was talking about serving God or mammon (money, and the things money can buy).  But this applies to trying to serving God and the world at the same time (see James 4:4), or God and anything in opposition to Him!

•      Serving God through Jesus Christ is to make the Son of God Lord of your life!  As Paul wrote in I Corinthians 12:3, “…no one speaking by the Spirit of God calls Jesus accursed, and no one can say that Jesus is Lord except by the Holy Spirit.”  It is only by the power of the Spirit that we can call Him Lord and rightly serve God!

•      Paul warned us in I Thessalonians 5:19, “Do not quench the Spirit.”  Sin in our lives does just that!  And if we are off somewhere Dwelling In The Devil’s Dominion, nothing but repentance and confession will please God!

So be very careful where you find yourself dwelling!  Your spiritual life depends on it!  And it will greatly influence the lives of those around you!