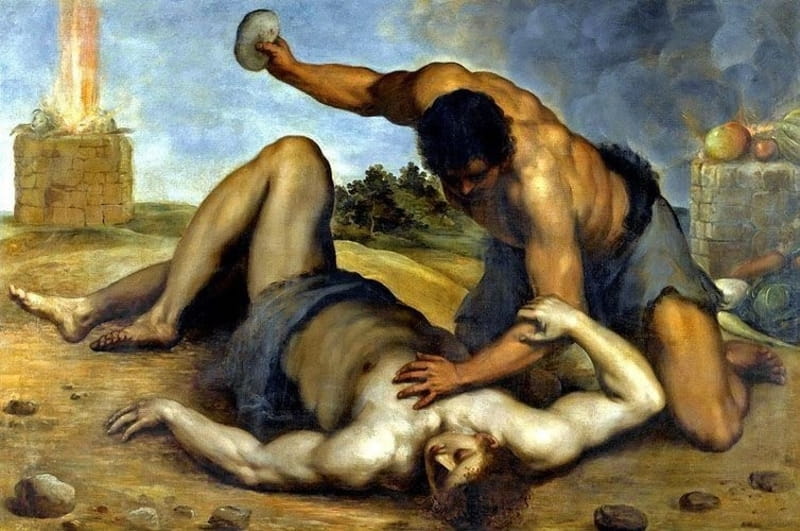 Now Abel was a keeper of sheep, but Cain was a tiller of the ground. And
…Cain brought an offering of the ground to the LORD. Abel also brought
of the firstlings of his flock and their fat. And the LORD respected Abel
and his offering. But He did not respect Cain and his offering. And Cain
was very angry….Now Cain talked with Abel…when they were in the field…
[and] Cain rose up against Abel his brother and killed him.

This is not the first example I could have used for Two…! For Adam and Eve would make for a good discussion. But they have often been the focus of studies, where Cain and Abel have taken more of a back seat. So let’s look at Cain and Abel…

•      Two brothers – We learn from verses 1 and 2 of Genesis 4 that Cain was Adam and Eve’s firstborn. Abel was born sometime after.

✞      God had promised our first parents as He announced to the snake in Genesis 3:15 (the proto evangelium – the first mention of the gospel): “…I will put enmity between you and the woman, and between your seed and her seed; He shall bruise your head, and you shall bruise His heel.” Of course, this refers to the Messiah, Jesus Christ, who had His heel bruised by the crucifixion, but crushed the head of Satan – a death blow! (See John 12:31; Romans 16:20; Revelation 20:10).

✞      From what Eve exclaimed when Cain was born, “I have gotten a man from the LORD…” (Genesis 4:1), she must have thought this was the One who would defeat the devil and restore humankind to paradise!

▸      Why is that? Jeremiah 17:9 tells us, “The heart [of fallen sinful man] is deceitful above all things, and desperately wicked; who can know it? ”

▸      And so our thoughts are bent, crooked, and totally missing the mark of God’s standard! What is His standard? Jesus tells us in Matthew 5:48, “…you shall be perfect, just as your Father in heaven is perfect.” Only in Christ can we reach the Father’s standard! And it consists of Jesus’ perfection – given freely to us upon receiving Him as our Savior! It is never earned! (See Ephesians 1:6; 2:8, 9).

•      Two responses of the LORD – Why did He accept Abel’s offering, but reject Cain’s?

✞      Cain first – his offering was of the fruit of the ground – vegetables!

✞      Abel’s offering was of the firstlings of his flock – involving the shedding of blood!

▸      God had already shown what was necessary for a sacrifice when, as it says in Genesis 3:21, “…for Adam and his wife the LORD God made tunics of skin, and clothed them.” This necessitated the first sacrifice of blood for the covering of man!

▸      Although it does not say, there was probably further instruction given to Adam and Eve (and maybe also to Cain and Abel) concerning proper sacrifice!

•      Two reactions to the LORD’s responses – both concerning Cain!

Why are you angry, and why do you look disappointed? If you do well,
won’t you be accepted? But if you don’t do well, sin is lying outside your
door ready to attack. It wants to control you, but you must master it.

In other words, “Don’t give in to sin! Turn to God and let Him handle it! ”

✞      But Cain gave in to sin! He let his anger take control and murdered his brother! Why? Because, as it says in I John 3:12, “…Cain…murdered his brother. And why did he murder him? Because his own works were evil and his brother’s righteous.” Well, that’s one way to handle the disappointment of not winning – kill the one in first place! We know from further study of the scripture that Cain never repented of his sin! (See Genesis 4:9-17). And he fathered a godless line of descendants! (See Genesis 4:18-24).

•      That brings us to our last point: Two results that forever affected humanity!

✞      Cain not only fathered a Godless line of descendants, he has forever been held up as an example of what not to be and do! As it is written in I John 3:11 and 12, “…we should love one another, not as Cain who was of the wicked one and murdered his brother.”