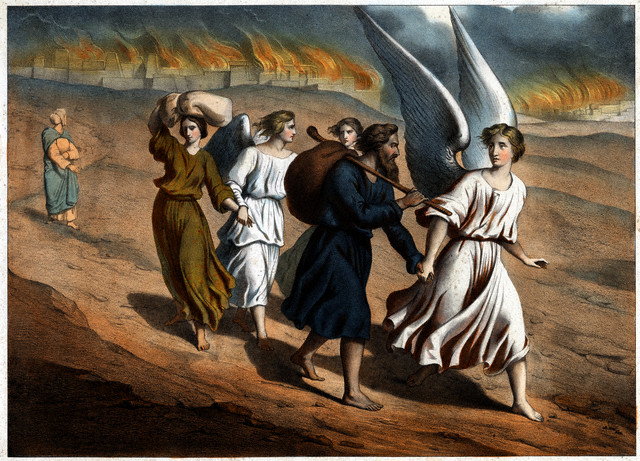 Abraham let Lot choose first – unusual in that ancient culture where age was given precedence!  We are told in Genesis 13:10 that “…the plain of Jordan…”

•      “…was…like the garden of the LORD….”  As he gazed over the valley, it must have reminded him of the traditions of the Garden of Eden, passed down through the generations since Adam.

There is a significant detail brought out in Genesis 13:11:  “Then Lot chose for himself all the plain of Jordan….”  It was not God’s choice!  It was what Lot wanted!  Be careful when tempted to follow the desires of your heart !  Jeremiah 17:9 warns us, “The heart is deceitful above all things, and desperately wicked; who can know it? ”  Paul reminded the Christians of Ephesus what everyone is like before conversion:  “…we all once conducted ourselves in the lusts of the flesh, fulfilling the desires of the flesh and of the mind, and were by nature children of [God’s] wrath….”  When Lot chose for himself (when we chose for ourselves) God is not consulted!  Such choices are based only on what we want!  Remember what Jesus said as He prayed to the Father in the garden:  “…nevertheless not My will, but Yours, be done.” (Luke 22:42).  Do not rely on your own desires apart from God’s leading when making decisions!

II Peter 2:7 and 8 describe Lot thus:  “…that righteous man, dwelling among…the wicked… tormented his soul day to day by seeing and hearing their lawless deeds….”  But the record of Genesis, chapters 13, 14, and 19 seems to speak otherwise!  There is a progression of this man sliding deeper and deeper into sin!

•      Genesis 14:12 – When five kings (including the kings of Sodom and Gomorrah) rebelled against “…Chedorlaomer king of Elam…” (Genesis 14:1), the Elamites banded together with three other nations to fight – “…four kings against five…” (Genesis 14:9).  The victorious four kings “…took all the goods of Sodom and Gamorrah, and all their provisions, and went their way.  They also took Lot, Abram’s brother’s son who dwelt in Sodom….”  Before Lot was dwelling near Sodom. Now he was dwelling in Sodom!

✡     The gate of a city was the town hall of that day – where the business of the city and its people was discussed and judged (see for instance Ruth 4:1-12).

✡     It seems that Lot was now a member of the town council in the sinful city of Sodom!

•      The evening of the angels’ arrival, we are told in Genesis 19:4 and 5 (International Standard Version):

…all the men of Sodom and its outskirts, both young and old, surrounded
the house.  They called out to Lot…“Where are the men who came to visit
you tonight?  Bring them out to us so we can have sex with them!”

What was Lot’s answer?  “Look here, I have two daughters who are virgins.  Let me bring them out to you, and you may do to them whatever you wish, only don’t do anything to these men…” (Genesis 19:8 – International Standard Version).

▸      …a host was expected to protect his guests!

•      Genesis 19:14 – When the angels told Lot that the LORD was going to destroy Sodom and the surrounding cities, “…Lot…spoke to his sons-in-law [probably engaged to marry his daughters] and said, ‘Get…out of this place; for the LORD will destroy this city!’  But…he seemed to be joking.”  Apparently, Lot’s testimony was so compromised that his sons-in-law took his serious warning as a joke!

•      Genesis 19:26 – As they were fleeing from the destruction of Sodom, Lot’s “…wife looked back…and she became a pillar of salt.”  Just how she became a pillar of salt is puzzling.  But the point is, her husband’s involvement in sinful Sodom’s lifestyle infected her life to the point where her longing was back there in Sodom, not in God’s future!

Friday’s blog will complete the results of Lot’s choice.