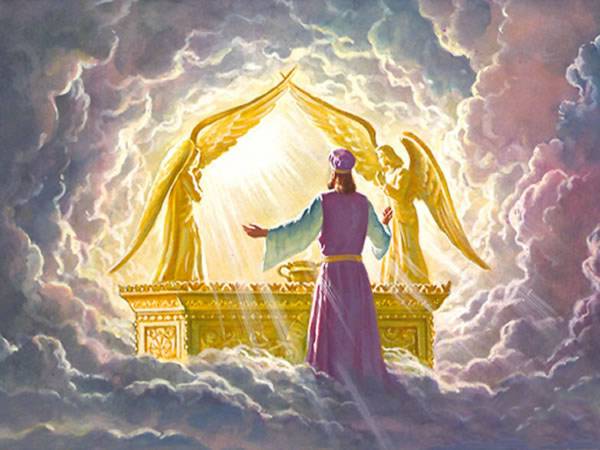 The last nine chapters of Ezekiel – chapters 40 through 48 – describe an extended vision God gave the prophet concerning the future temple the Jews would someday build.  This was not the edifice Herod the Great built.  The construction that temple continued for about 80 years, from 19 BC to 63 AD.  The temple building itself was finished in ten years or less.  But the decorations and outbuilding construction went on for decades – long after King Herod died.

Herod’s temple was the third Jewish temple.  The first was built by King Solomon, David’s son, and stood by some scholarly estimates from 964 to 586 BC when the Babylonians destroyed it.  The second temple was built by Israelites returning from the 70 year Babylonian captivity.  It was started around 538 BC, and completed about 16 years later.  This second temple stood for over 500 years until it was torn down and replaced by Herod’s temple.

Some say Herod’s temple was not the third one built, but just the second one renovated.  At www.bible-history.com, I found this:

Although the reconstruction was equal to an entire rebuilding, still the Herodian
Temple cannot be spoken of as a third Temple, for Herod even said himself, that
it was only intended to be regarded as an enlarging and further beautifying of
that of Zerubbabel’s [the temple built after the Babylonian captivity].

The Jewish temple described in Ezekiel is considered the final temple – built during the first half of the final seven-year Tribulation, and in use and inhabited by the Shekinah glory during the millennial reign of Jesus Christ on earth!

In Ezekiel 48:35, at the very end of the description of this temple (and of Jerusalem where the temple will be located), we are introduced to Jehovah-Shammah – The LORD is there:  “All the way around [the city of Jerusalem] shall be eighteen thousand cubit:  and the name of the city from that day shall be:  THE LORD IS THERE.”

Jehovah-Shammah:  this concept was and is so important to pious Jews.  God had left the temple and the holy city (see Ezekiel chapters 10 and 11) because of the unrepentant sins of His chosen people.  That Shekinah glory never returned!  But God will come back to His temple – the millennial temple – and He will once again His glory will shine forth! (See Ezekiel 43:1-5. Compare Revelation 22:3-5).

What has this to do with us today?  When God gave the prophecy of Isaiah 7:14, He said, “Therefore the Lord himself shall give you a sign; Behold, a virgin shall conceive, and bear a Son, and shall call His name Immanuel.”  Over 700 years later, an angel came to Joseph with this message recorded in Matthew 1:20 through 23.  The angel gave to this man entrusted to be the earthly father of Jesus the meaning of Isaiah’s prophecy:

“Joseph, son of David, do not be afraid to take to you Mary your wife,
for that which is conceived in her is of the Holy Spirit.  And she will
bring forth a Son, and you shall call His name JESUS, for He will save
His people from their sins.”  Now all this was done that it might be ful-
filled which was spoken by the Lord through the prophet, saying:  “Be-
hold, a virgin shall be with child, and shall bear a son, and they shall
call His name Emmanuel,” which is translated, “God with us.”

Seeing there is not a physical temple today on Mount Moriah in Jerusalem, consider what it says in Ephesians 2:20 through 22 (Easy-To-Read Version) and I Peter 2:5 (Good News Bible):

You believers are like a building that God owns.  That building was built
on the foundation that the apostles and prophets prepared.  Christ Jesus
Himself is the most important stone in that building.  The whole building
is joined together in Christ, and He makes it grow and become a holy
temple in the Lord.  And in Christ you are being built together with His
other people. You are being made into a place where God lives through
the Spirit….Come as living stones, and let yourselves be used in building
the spiritual temple, where you will serve as holy priests to offer spiritual
and acceptable sacrifices to God through Jesus Christ.

We are the temple of God! (See I Corinthians 6:19).  And while God is there – Jehovah-Shammah – it may make for better understanding to say, God is here – right here with you and me, and every other true believer!  Wherever you are, that is where God is!

So remember this!  Practice His presence!  Let His Shekinah glory shine forth!  This truth – Jehovah-Shammah – will radically transform your life!