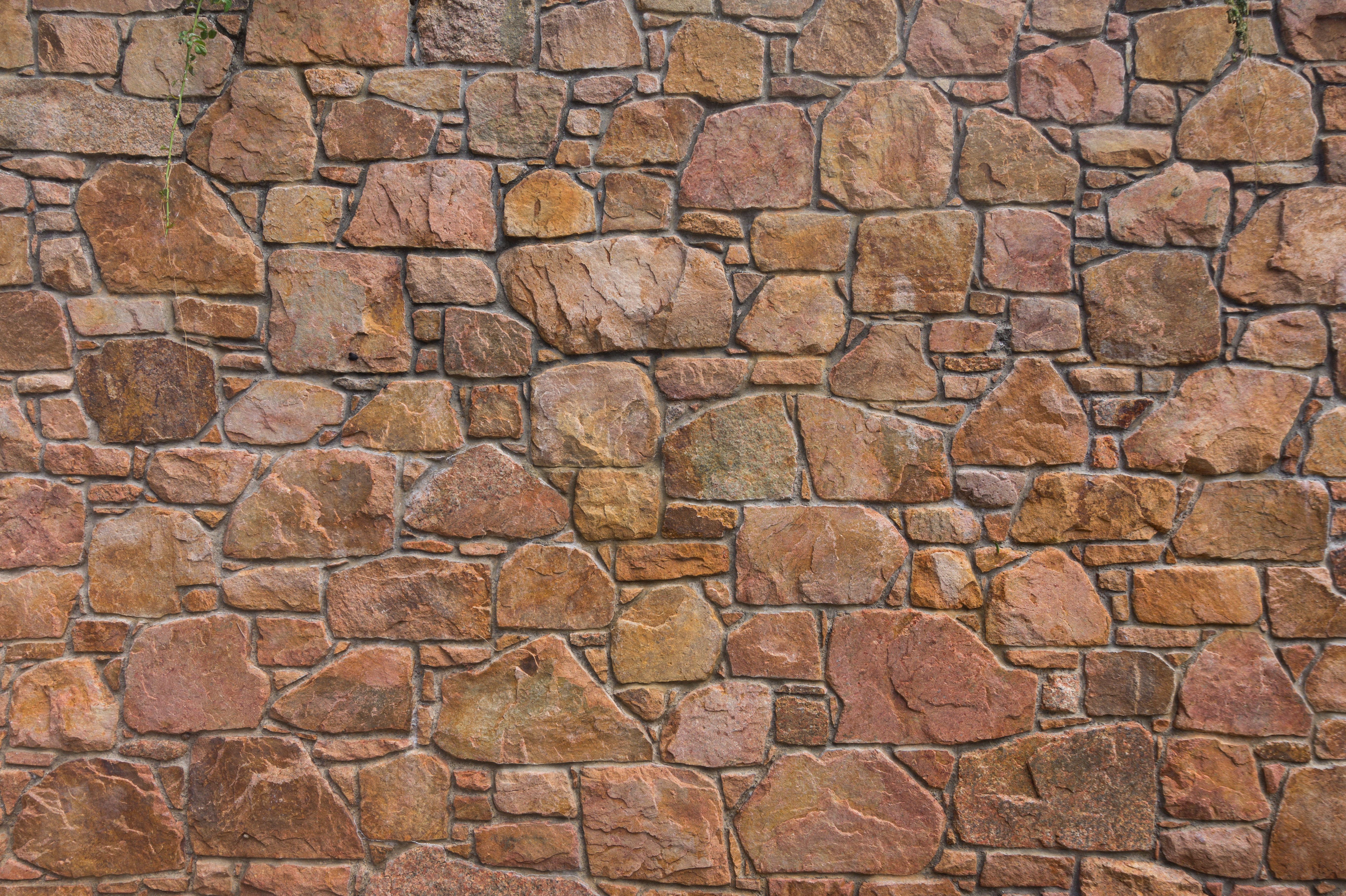 I built a retaining wall in our back yard.  There is a steep slope behind the house that goes up to the edge of the road that brings one down the mountain and into our little village.  The year before I built the wall, the hill had slipped, dropping six feet right at the edge of the road and kicking out earth and rocks into our small back yard.  The debris was actually piled right up against the back of our garage!  I had an excavator dig out a thousand tons of dirt in preparation for the wall.  Then I poured a foot-thick footer, five feet wide.  On that footer I built the retaining wall – 168 feet long and up to seven feet high – using 100 tons of semi-cut sandstone I gleaned from an old stone house that been torn down.  The stones weighed up to 300 pounds each! But most were a lot smaller.  The wall is held together with rebar and 50 tons of mortar!  It is five feet wide at the bottom and slopes up in the back to the top, with 250 tons of limestone backfill.  That way the pressure is more down than out.  Two of us, working eight hours a day, six days a week, finished the wall in two and a half months!  When it was finished, I had one stone inscribed with “The Great Wall of Van Meter”!

As I would complete a day’s stonework – about two-plus feet a day – I would wait until the mortar dried some, and then take a short piece of rebar and dig out some cement between the stones on the front of the wall.  That makes the stonework of the finished product stand out.  But one day I forgot to etch out the mortar.  By late evening, the cement had almost dried.  I worked for more than two hours on the two feet of wall we had laid that day, digging into the mortar with rebar and hammer to get the effect I wanted!  It would have been so much easier if I had done my work when the cement was not so set and dry!

This reminds me of what it says in Proverbs 22:6:  “Train up a child in the way he should go, and when he is old he will not depart from it.”  It is a lot easier to impress good life values into another human being when they are young – when they are easily molded – when the Cement is Wet!

I know.  I learned my life values when I was young.  The problem is that they were not very good life values!  My father left the family when I was ten years old.  Although I can’t remember the feelings of devastation (I pushed them far down inside because they were so painful), I know I had them.  I experienced loss – of my father, of family coherency, of our dairy farm – since my mother had to sell out the next spring, of many of my roots!  I started medicating myself with alcohol when I was twelve, and by the time I was fifteen, I was an alcoholic!  I ran with the wrong crowd, got into trouble, did poorly in school, and impressed upon the Wet Cement of my life a multitude of negative values.  That cement hardened with those impressions firmly in place!  It took many years – sometimes of very hard work – to dig out that cement and impress new Christian values in their place!  I am still working on it!  Praise God He is very patient!

I have nine grandchildren and one great-grandson – the child of my eldest granddaughter.  Seven plus the one live nearby, and besides my 26 year old granddaughter, they are all boys, ranging in age from eight months to nine years.  There is plenty of Wet Cement to work on! And work is needed!

The Apostle Paul tells us in Romans 5:12 (Good News Bible), “Sin came into the world through one man [Adam], and his sin brought death with it.  As a result, death has spread to the whole human race because everyone has sinned.”  Every mother’s child has a sin nature from conception!  And every boy or girl born into this old world naturally has a penchant to sin!  You don’t have to teach a child to do wrong. They learn that early on and often all by themselves!  One of the first words a child seems to learn is “No!”  It takes constant effort and godly patience to “Train up a child in the way he should go….”  But the more consistently it is done, and from a young age, then the result will be more often manifested, “…and when he is old he will not depart from it.”

What is the way he should go?  Proverbs has this answer also.  Here are a few of the Gems for Living found in this marvelous book of the Bible:

•      Proverbs 3:5, 6 – “Trust in the LORD with all your heart, and lean not on your own understanding; in all your ways acknowledge Him, and He shall direct your paths.”

•      Proverbs 3:9, 10 – “Honor the LORD with your possessions, and with the firstfruits of all your increase; so your barns will be filled with plenty, and your vats will overflow with new wine.”

•      Proverbs 9:10 – “The fear of the LORD is the beginning of wisdom, and the knowledge of the Holy One is understanding.”

•      Proverbs 28:13 – “He who covers his sins will not prosper, but whoever confesses and forsakes them will have mercy.”

There are a lot more Gems in the book of Proverbs.  Why don’t you mine some yourself?  And then impress what you learn into your children and grandchildren.  Do it in their Wet Cement while they are young and impressionable!