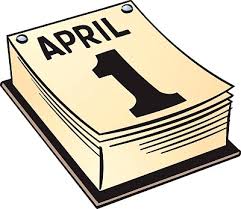 This is April first – April Fool’s Day!  In researching April Fool’s Day, I found that the origin is debatable.  There are possible references to playing pranks on this day as far back as Chaucer’s Canterbury Tales in 1392.  Several precursors of the day include the Roman festival of Hilaria, the Holi festival in India, and the Medieval Feast of Fools.  Some researchers tie April Fool’s to the Gregorian calendar, introduced in 1582, which changed the date of the New Year from April first to January first.  Those who clung to the Julian calendar and it’s old way were considered fools.  Widespread celebration today usually involves harmless jokes played upon an ‘April fool.’

I find it interesting that April first is near the recognized date when Jesus was either presenting Himself as King of the Jews, was crucified, or was resurrected.  His followers, Saint Paul writes in I Corinthians chapter 1, are considered fools by the unbelieving world because they believe in the foolish story that God died for their sins!  Here are verses 18 and 21 through 25 from I Corinthians 1:

…the message of the cross is foolishness to those who are perishing,
but to us who are being saved, it is the power of God….For since, in
the wisdom of God, the world through wisdom did not know God, it
pleased God through the foolishness of the message preached to save
those who believe.  For the Jews request a sign, and Greeks seek after
wisdom; but we preach Christ crucified, to the Jews a stumbling block,
and to the Greeks foolishness, but to those who are called, both Jews
and Greeks, Christ is the power of God and the wisdom of God.  Be-
cause the foolishness of God is wiser than men, and the weakness of
God is stronger than men.

This passage contrasts two kinds of both wisdom and foolishness – God’s and the world’s.  And we have to begin with a Biblical understanding of the source of these two views.

•      The world’s view of wisdom and foolishness – When Satan tempted Jesus at the beginning of the Lord’s ministry, it is recorded in Luke 4:5 through 7:

Then the devil, taking Him [Jesus] up on a high mountain, showed
Him all the kingdoms of the world in a moment of time.  And the
devil said to Him, “All this authority I will give You, and their glory;
for this has been delivered to me, and I give it to whomever I wish.
Therefore, if You will worship before me, all will be Yours.”

The kingdoms of the world, including mankind and any social order man creates, belong to the devil!  How did he get it?  God, in Genesis 1:26, gave Adam “…dominion…over all the earth….”  But in Genesis 3 is the record of the fall of mankind.  Adam, as it were, bowed and worshiped Satan when he disobeyed God and ate the forbidden fruit!  In that one act of disobedience, dominion over all the earth was transferred to the devil!  That is why Paul calls him in II Corinthians 4:4 (many translations), “…the god of this world….”

Satan is called a liar and a murderer (John 8:44); the thief who only comes to steal, and to kill, and to destroy (John 10:10); one who deceives the whole world (Revelation 12:9), and blinds it (II Corinthians 4:4); who seeks whom he may devour (I Peter 5:8).  If indeed he is the source of this world’s wisdom, we must avoid becoming wise only by the world’s standards!

And what does such ‘wisdom’ teach us?  That we – and all else – happened by chance!  That we are basically good, and do not need a savior!  That the incarnate God dying in our place is foolishness!  That Jesus was a good man, but not divine!  That there are many ways to heaven – if there is a heaven!  That God would not send anyone to hell – if there is a hell!  That the Bible is a collection of stories and myths!  That my purpose in life is to fulfill my desires! And a whole lot more….!

So as Paul wrote in our featured Scripture, “…the message of the cross is foolishness to those who…” subscribe to the wisdom of the world!  Paul refers to them as “…those who are perishing….”  Those who think the message of the cross is foolishness, are indeed perishing – ruining this life for themselves as well as eternity!  But we shall see in Monday’s blog the true wisdom of God!  A preview of it is what Paul tells us, speaking to Christians in I Corinthians 1:30:  “But of Him you are in Christ Jesus, who became for us wisdom from God — and righteousness and sanctification and redemption….”