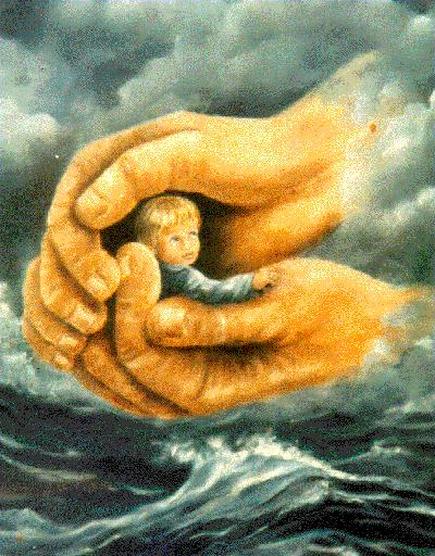 In I Samuel 15:2 and 3, the prophet Samuel gave the newly-crowned King Saul this message from God:

…God is love.  In this the love of God was manifested toward us, that God
sent His only begotten Son into the world, that we might live through Him.
In this is love, not that we loved God, but that He loved us and sent His Son
to be the propitiation for our sins.

That first passage sure does not sound like God is love!  So how do we reconcile all this?

The first promise of a Redeemer is called the Proto Evangelium, and is found in Genesis 3:15 (God talking to the serpent):  “And I will put enmity between you and the woman, and between your seed and her Seed.  He shall bruise your head, and you shalt bruise His heel.”  The seed of the woman is Jesus Christ!  He is not the seed of the man in the sense that He did not have a human father, but was conceived by the Holy Spirit (see Luke 1:35).  He is the Son of God!

But Jesus was born into the world dominated by the devil!  Satan controls “…all the kingdoms of the world…and their glory…” (Luke 4:5, 6).  As it says in II Corinthians 4:4 (Contemporary English Version):  The devil is “The god who rules this world….”  Hence, ever since the beginning, the devil has fought against the coming of the One who would defeat him and redeem mankind and all creation – buying back “The kingdoms of this world…” which again become “…the kingdoms of our Lord and of His Christ…” (Revelation 11:15).  And Satan uses people, societies, and nations he controls in his war against God!

How was the Savior to arrive upon this earth?  God was preparing for the event long before His Son’s appearance (see Galatians 4:4, 5).

•      Satan so corrupted the human race that in the time of Noah, God wiped out mankind by the flood! (See Genesis 6:5-7).  That way, the Messiah could not come as a human being.  But God preserved righteous Noah and his family (see Genesis 6:8).

•      Jacob was next in line of the promised Seed!  But Jacob stole his brother Esau’s firstborn blessing (see Genesis 27:1-29), and Esau planned to kill him for it! (See Genesis 27:41).  If that had happened, the devil would have stopped God’s promise!

•      The children of Israel became slaves in Egypt.  So fearful was Pharaoh of the greatly increasing Israelites that he ordered the murder of all newborn Jewish boys! (See Exodus 1:15-22), again, wiping out the Seed line!  But baby Moses escaped death! (See Exodus 2:1-10).

•      God chose Moses to be the deliverer of Israel from slavery in Egypt! (See Exodus 3:7-10).  But Moses misjudged the Lord’s calling.  He tried to deliver the Israelites through murder, and had to flee for his life! (See Acts 7:23-29).  Moses – the one whom God used to bring Israel out of Egypt, and the type of Christ, the Redeemer – was wanted for murder!

•      Concerning the incidents of the golden calf (see Exodus 32:1-6) and rejection of the Promised Land (see Numbers 13:26-14:10) – the Israelites were so rebellious, it came twice to a point that God told Moses, “…let Me alone, that My wrath may burn hot against them, and I may consume them.  And I will make of you a great nation.” (Exodus 32:10 – see also Numbers 14:12).  If Israel had been destroyed, the promised Seed through Judah could not have arrived!  Moses was of the tribe of Levi.

We have to stop here today.  But remember, God will not let anything happen to the Seed of the woman, Jesus Christ!  His redemptive plan necessitated protecting that Seed at all costs!