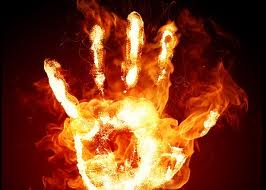 I shared in the last blog about my friend’s involvement with Unity, a dangerous cult that deny’s much of what orthodox Christianity embraces – including the unique deity of Jesus Christ and His vicarious sacrifice for our sins on the cross!  When I challenged my friend about Unity’s teachings, he boldly stated that, whereas he had accepted Christ as his Savior when he was a teenager, he now un-accepted Him!    I immediately thought of Hebrews 6:4 through 6:

…it is impossible for those who were once enlightened, and have tasted
the heavenly gift, and have become partakers of the Holy Spirit, and
have tasted the good word of God, and the powers of the age to come,
if they fall away, to renew them again to repentance, since they crucify
again for themselves the Son of God, and put Him to an open shame.

If my friend had really tasted of the heavenly gift, had been a partaker of the Holy Spirit, if he had really tasted the good word of God, and the powers of the age to come, then he was in extreme danger!  He was Playing With Fire – the fires of hell!

I started praying for my friend.  Oh, I had prayed for him for years.  But now I began to pray that God would somehow save him – even making an exception to what it says in our featured Scripture!  Either that, or I prayed that when he had accepted Jesus as his Savior years before, it was an emotional response that had no depth of commitment.  I was hoping that he did not mean it the first time, so Hebrews 6:4 through 6 would not apply!

I did not see much evidence in his life over the next fifteen years, evidence that he had rethought his declaration of rejection.  I did not see where he had fully committed himself to the Savior.  My friend married – a second time – and he and his wife began to show an increasing interest in true spiritual things, even joining a sound Biblical church and becoming more and more involved.  My prayers for him began to change – from the ‘exception’ prayer mentioned above to “Thank You and praise You, Lord, for bringing my friend back to a meaningful relationship with You.”

Then I found out that he and his wife were seriously studying the Bible and taking correspondence courses toward a degree in Biblical studies!  I kept rejoicing and praying for them as they grew in their Christian faith.  Two years ago they moved to Colorado to attend Bible college and complete their degrees to become ministers!  “Wow, Lord! ” I prayed, “You sure do know how to answer my prayers! ”  Currently, they are in the process of moving back east to be closer to my friend’s son and family.  They want to witness to this son to bring him and his family into God’s kingdom!  I can hardly wait to see what God is going to do in their lives next!

We don’t know at what point Hebrews 4:4 through 6 comes into effect.  When does it become “…impossible…to renew them again to repentance…”?  In Psalm 34:8 it is written, “Oh, taste and see that the LORD is good; blessed is the man who trusts in Him.”  I think this describes a two-step process:

•      The first step is the taste – to see if the LORD is good.  This is just a nibble!  My grandson does not even go that far to see if he will eat what his mom or his grandma sets before him.  He sniffs the food!  If it does not pass his ‘sniff test,’ then he will not eat it!  Once you have sampled the Savior – either by tasting or sniffing – you then decide from that sample that, indeed, the LORD is good !  Then comes…

I am the living bread which came down from heaven.  If anyone eats of
this bread, he will live forever; and this bread that I shall give is My flesh,
which I shall give for the life of the world….Most assuredly, I say to you,
unless you eat the flesh of the Son of Man and drink His blood, you have
no life in you.  Whoever eats My flesh and drinks My blood has eternal
life, and I will raise him up at the last day.

But at what point of tasting and then falling away does it become irreversible so that one cannot renew again to repentance?  Every unbeliever faces the fires of eternal hell! (See Revelation 21:8).  I would pray for all who might taste and fall away to not push the limit God has set!  Don’t be Playing With Fire!