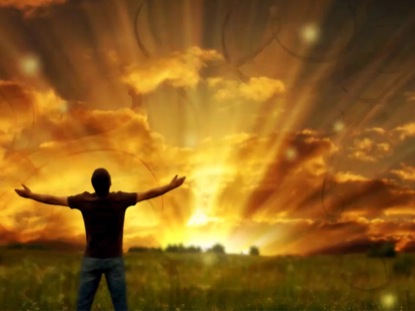 In the letter to the church in Pergamos, we find some interesting and praiseworthy things. Here are parts of Revelation 2:12 through 14, and verses 16 and 17:

These things says He who has the sharp two-edged sword: “I know your
works, and where you dwell, where Satan’s throne is. And you hold fast
to My name, and did not deny My faith even in the days in which Antipas
was My faithful martyr….But I have a few things against you….Repent, or
else I will come to you quickly and will fight against them with the sword
of My mouth….To him who overcomes I will give some of the hidden man-
na to eat. And I w ill give him a white stone, and on the stone a new name
written which no one knows except him who receives it.”

✞      So powerful is the word of Jesus Christ that when He spoke it at the beginning, all things were created! You see, in Colossians 1:16 it is written, “…by Him all things were created that are in heaven and…in earth….All things were created through Him, and for Him.” So when we read in Genesis 1:3, “And God said, ‘Let there be light;’ and there was light…,” it was the pre-incarnate Son of God who spoke! After all, “…His name is called The Word of God.” (Revelation 19:13 – see John 1:1-3, 14; Hebrews 1:2, 3). Praise the Lord for His powerfully creative word!

✞      His word being a “…sharp two-edged sword…,” it is, first of all, an instrument of death and destruction! For it says in Revelation 19:15, “…that with it He should strike the nations.” If Jesus created all things (and, according to Colossians 1:17 and Hebrews 1:3, He also sustains all things) He certainly has the power to speak and bring to ruin anything against which that word is directed – be it nations or individuals! Woe be to anyone who disobeys and opposes God! So, as He says in verse 16, “Repent, or else I will come to you quickly and will fight against them with the sword of My mouth.” Praise Him that with just a word He can eliminate evil!

✞      But just as a surgeon’s scalpel is keenly sharp, but is used for healing – in the same way, the Lord’s “…sharp two-edged sword…” causes healing! Remember the faith-filled words of the Roman centurion in Matthew 8:8: “…only speak a word, and my servant will be healed.” Jesus spoke the word of healing, and the dying servant became well and whole! Praise God that His word heals!

•      Revelation 2:13 – “I know your works, and where you dwell, where Satan’s throne is.” Pergamos (also called Pergamum) was a city of Asia Minor where the cult of Roman emperor worship was first established! Hence the city “…was seen as the seat of the power of evil because…the God-given power of the state has been harnessed to the blasphemous worship of a man.” (Eerdmans The New Bible Dictionary, Pergamum). “…Antipas [who] was My faithful martyr…” may have been the first Christian dying for his faith in that city because he refused to worship the emperor!

But no matter how powerful the devil is (and he may be the most powerful created being ever – see Ezekiel 28:12-17), we may be greatly encouraged by I John 4:4: “You are of God, little children, and have overcome them, because greater is He who is in you than he who is in the world.” (See Luke 10:18; Romans 16:20; I Corinthians 15:57). Praise You, Lord Jesus that You give us the victory over Satan!

✞      Verse 14 – “…you have there those who hold the doctrine of Balaam, who taught Balak to put a stumbling block before the children of Israel, to eat things sacrificed to idols, and to commit sexual immorality.” The full story is found in Numbers, chapters 22 through 25 (see also the November 11, 2016 blog, From Egypt To Canaan – XXX). Balak, king of Moab, was so frightened of the invading Israelites, he hired the prophet Balaam to curse Israel. For, the king told him, “…I know that he whom you bless is blessed, and he whom you curse is cursed.” But Balaam would not curse Israel! For God told him to bless that nation! However, he turned out to be a deceitful prophet, because he counseled the Moabites how they could defeat Israel!

▸      “When you have seduced them sexually, they will follow you to worship
your gods, committing idolatry!”

Balaam’s teaching, and the resulting unfaithfulness of Israel caused God to send a punishing plague that killed 24,000 Israelites! In the Pergamos church, this seductive and idolatrous doctrine was still being taught! And it was causing believers to stumble in their faith!

•      Revelation 2:16 – “Repent, or else I will come to you quickly and will fight against them with the sword of My mouth.” While Jesus’ sword is powerful, and judgment (when needed) is swift, His preference is that we repent ! (See Ezekiel 18:32; 33:11). Praise Him that He so readily offers us the opportunity to repent, and to avoid judgment!

✞      “…I will give some of the hidden manna to eat.” Manna was the bread with which God fed the Israelites for 40 years in their wilderness journey (see Exodus 16:12-18; 35). But Jesus told His followers in John 6:51, “I am the living bread which came down from heaven. If anyone eats of this bread, he will live forever….” Praise the Lord that He is the true manna, freely offered to us!

✞      “…I will give him a white stone, and on the stone a new name written which no one knows except him who receives it.” There is argument over just what this white stone is. However, it is precious! And it involves a new name that goes with our new nature! (See II Corinthians 5:17). Only those who are born again and who overcome for their Lord will receive one! Praise Jesus that He has wonderful rewards for us in eternity!