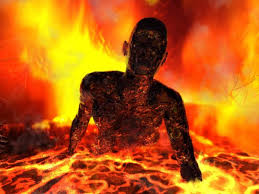 What The Hell…?  While people may use this question as a casual curse, we are using it to draw attention to the fact of hell, and the characteristics of it.  Today let’s look at Matthew 25:41 and 46:

Then He will also say to those on the left hand, “Depart from Me, you
cursed, into the everlasting fire prepared for the devil and his angels.”
…And these will go away into everlasting punishment, but the righteous
into eternal life.

This Scripture is from a passage dealing with what is called the judgment of the sheep and the goats (see Matthew 25:31-46).  This judgment takes place at the end of the Tribulation, and it is based on how the nations of the world treat those who have put their faith in Jesus Christ during this terrible time of the last seven years before the Lord’s return.  Jesus “…will separate [the people]…one from another, as a shepherd divides his sheep from his goats…the sheep on His right…the goats on the left.” (Matthew 25:32, 33).  The sheep will inherit the kingdom and enter eternal life with the Lord (Matthew 25:34, 46).  But the goats will go away into everlasting punishment (Matthew 25:46.).

It is important to understand the principle behind the judgment Christ gives!  As Paul wrote in Ephesians 2:8 and 9:  “For by grace you have been saved through faith, and that not of yourselves; it is the gift of God, not of works, lest anyone should boast.”  While at first reading of this judgment, it may seem that the Lord is assigning the people to either heaven or hell because of their works, eternal destination is always based on salvation by grace through faith!  But as James reminds us in James 2:17, “…faith by itself, if it does not have works, is dead.”  So works proves the faith you have or do not have! (See James 2:14-26).  Here in our featured Scripture, works are emphasized, but faith (or lack thereof) is always behind works!

This Scripture lifts up the fact of an eternal hell – “Depart from Me, you cursed, into the everlasting fire…everlasting punishment….” (Matthew 25:41, 46).  I have often heard unbelievers joke about hell:  “When I get there, all my friends will be there, and we’ll have a big party! ”  It won’t be like that – and for several reasons:

•      Sin has its origin in selfishness!  Selfishness is the emphasis of the importance of self.  God is to be first and foremost in our lives! (See Mark 12:30).  But Lucifer, in his five “…I will[s]…” in Isaiah 14:12 through 14, was putting himself before God!  And he fostered the same lie upon humankind when he told them, “…you will be like God, knowing good and evil.” (Genesis 3:5).  Ever since then, as Paul points out in Romans 1:22 and 23, people “Professing to be wise…became fools, and changed the glory of the incorruptible God into an image made like corruptible man — and birds and four-footed beasts and creeping things.”  Since man is the highest order of all the beings upon this earth, the best that other religions can do is to make gods in human image – some form of man or woman!  And if their gods are in the image of lesser beings (such as the many gods of ancient Egypt), that puts man even higher than God!

Now, applying this to eternity in hell – the focus on self will be so intensified that people will be completely wrapped up in themselves (their own suffering, loneliness, lostness, and hopelessness).  They will be totally unaware of anyone suffering around them!

•     I think though that an awareness might be extended to another if, “…in the lake which burns with fire and brimstone…” (Revelation 21:8), they bump into physical contact with the devil or one of his demons!

•      Jesus tells us that “…the everlasting fire [is] prepared for the devil and his angels.”  Apparently, the final hell is not designed to house sinful human beings!  It is for the devil and his angels!  However, if someone follows Satan in this life, and refuses to turn to the Lord Jesus Christ to be saved, he or she will follow the evil one right into “…the lake which burns with fire and brimstone, which is the second death.” (Revelation 21:8).

•      The final thought I want to present is the meaning of the second death.  The first death is that which all human beings face – physical death! (See Hebrews 9:27).  We will all die – except those who are raptured out of this life.  For it says in I Corinthians 15:51 and 52 (International Standard Version):

Not all of us will die, but all of us will be changed — in a moment, faster
than an eye can blink, at the sound of the last trumpet. Indeed, that trum-
pet will sound, and then the dead will be raised never to decay, and we will
be changed. (See also Philippians 3:21; I Thessalonians 4:13-17; I John 3:2).

The second death is spiritual death – separation from God, who is Spirit! (See John 4:24).  Paul tells us in Ephesians 2:1, we were all born into this world, “…dead in trespasses and sins….”  Our human spirits are dead toward God!  And unless that is changed, we will remain separated from Him throughout eternity!  This is why we desperately need to be “…born again…” (John 3:3 – see John 3:3-8; I Peter 1:23).  As someone once said, “If we are born once, we die twice! If we are born twice, we only die once!”  If we are only born physically, we will face both physical and eternal death!  If we are born again, we will only experience physical death!