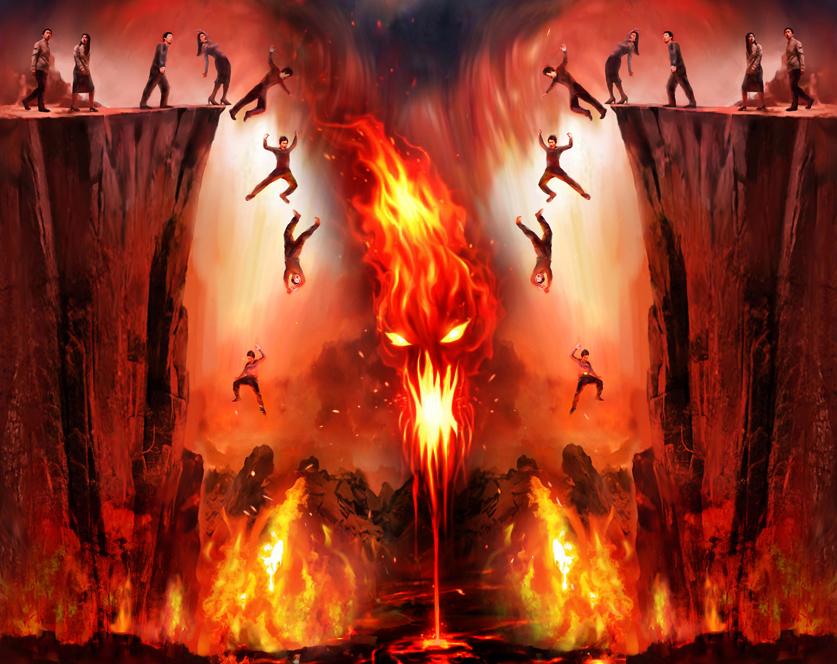 There is a prelude to hell, and I am not referring to what was mentioned in What The Hell…? – I, that is, hades.  We will examine the Great White Throne Judgment, in Revelation 20:11, 12, 14, and 15 (condensed and rearranged a bit due to space requirements):

Then I saw a great white throne and Him who sat on it, from whose face
the earth and the heaven fled away; and there was found no place for
them.  And I saw the dead, small and great, standing before God, and the
books were opened.  And another book was opened, which is the Book of
Life.  And the dead were judged according to their works, by the things
which were written in the books….And anyone not found written in the
Book of Life was cast into the lake of fire….This is the second death.

I remember several years ago when I traveled to Greece following the footsteps of Saint Paul.  We toured Varlaam Monastery in Meteora, impossibly built in 1541 through 1542 high on one of the vertical rock formations that are unique to this part of the world.  Of the many murals that adorn the monastery walls is one depicting the final judgment – the Great White Throne Judgment!  But that judgment is wrongly depicted in this mural!  For it is represented as a judgment of works determining whether a soul goes to heaven or hell !

Anyone who stands in judgment before God’s Great White Throne is already condemned to hell !  Why, then, are they further judged at all if their condemnation is so sure?

•      It stands to logical reason that some people are more wicked than others, and therefore should receive a more strict judgment.  Jesus hinted at this in Luke 12:47 and 48:

Also, according to what is known as the Bema Seat Judgment in I Corinthians 3:10 through 15, Christ reviews a believer’s works, and that one receives either rewards in heaven or loss of rewards depending on how he or she lived out his or her Christian life!  This is the way works come into determining the judgment.  Works do not determine whether one goes to heaven or hell, but they do determine the degree of rewards in heaven and the amount of suffering in hell !

Keep this in the forefront of your mind – salvation is only by God’s grace grasped by our faith in the finished work of the Lord Jesus Christ on Calvary’s cross – dying for our sins!

•      What about the books opened at the Great White Throne Judgment – one which is the Book of life, and the other (others) record the works of the damned?    I said, ‘others’ because I believe there are many books used to record all the works of humanity.

✞      Do angels sit on the clouds of heaven feverishly writing down everything we do?  Or, since the advent of the computer age, do they type away on a the keyboard of a heavenly computer?  Obviously, no!

✞      God is an economist!  By that I mean, He does not waste resources or energy on tasks at hand.  I believe He has built into creation a way to record every action, word, and though of His highest creation – mankind.  Here are some pertinent references:

All living creatures put out energy! And all things surrounding them, even inanimate objects absorb that energy!  All God has to do at the Judgment is turn up the volume of creation and play back what is recorded!  Hence, the books!

•      The Book of Life has written in it everyone who has truly put their faith and trust in Jesus as Savior!  At the Great White Throne Judgment, it is an official document – guaranteed proof – of who is and who is not saved!  And, of those who stand before the Lord at that judgment, not one of them will have his or her name in the Book of Life!

This finishes our study of What The Hell…?  And may you be ‘finished’ with the threat of hell because you have accepted Jesus Christ as your personal Savior!