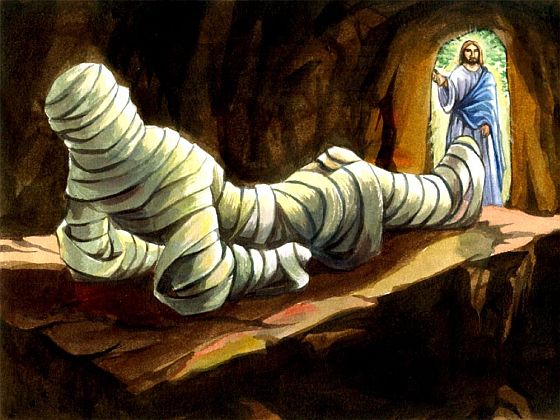 Lazarus had died! His sisters, Martha and Mary “…sent to…[Jesus], saying, ‘Lord, behold, he whom You love is sick.’ ” (John 11:3). But Jesus was “…away…beyond the Jordan…the place where John was baptizing at first…” (John 10:40). We are told in John 3:23 that “…John…was baptizing in Aenon near Salim….” This was about 45 miles north of the Dead Sea, and almost 50 miles northeast of Jerusalem. That’s at least a two-day walk, and it says in John 11:6 that Jesus “…stayed two more days in the place where He was.” That’s why John 11:17 informs us, “So when Jesus came, He found that he [Lazarus] had already been in the tomb four days.”

We know that the Lord raised Lazarus from the dead – an amazing miracle! Here is the record from John 11:43 and 44:

[Jesus]…cried with a loud voice, “Lazarus, come forth!” And he who
had died came out bound hand and foot with graveclothes, and his face
was wrapped with a cloth. Jesus said to them, “Loose him, and let him
go.”

But what happened to Lazarus after he was raised? Let’s look at Lazarus Loosed!

•      The Scripture gives us two pieces of information of post-resurrection Lazarus:

✞      John 12:1 and 2 – “…six days before the Passover, Jesus came to Bethany…. There they made Him a supper; and Martha served, but Lazarus was one of those who sat at the table with Him.” How long did this take place after Lazarus was Loosed? There may be a hint in John 10:22: “Now it was the Feast of Dedication in Jerusalem, and it was winter.” After a run-in with the Jews (who attempted to stone Him – see John 10:31), the Lord left Jerusalem and went to Aenon near Salim. The Feast of Dedication (today called Hanukkah or the Festival of Lights) is celebrated in late November or December. The supper to which Jesus was invited at Bethany was held six days before Passover, (observed late March or into April). But how long before Lazarus was Loosed, that the supper was served, we don’t know.

What we are told about this supper is that Lazarus was one of those who sat at the table with Jesus. The three siblings of this hosting family show three ways of relating to the Lord in John 12:2:

✞      John 12:9-11 – “Then a great many of the Jews…came…that they might also see Lazarus, whom He had raised from the dead. But the chief priests took counsel that they might also put Lazarus to death, because on account of him many of the Jews went away and believed in Jesus.” I am sure Lazarus heard about this plot, and it must have been difficult to live under the threat of death!

In many parts of this world, to convert to Christianity is to have a very serious death threat put upon you! We are blessed in this western world to live our lives free of such threats. But we must keep our struggling brothers and sisters in Christ in prayer! And we must help them as we have opportunity! Did not Paul say in I Corinthians 12:25 and 26:

…there should be no schism in the body, but that the members should
have the same care for one another. And if one member suffers, all the
members suffer with it; or is one member is honored, all the members
rejoice with it. Now you are the body of Christ, and members individ-
ually.

•      Tradition gives us some information about Lazarus after he was Loosed (The Search for the Twelve Apostles, by William Steuart McBirnie). McBirnie covers not only the twelve, there are 20 chapters covering the traditions of several other Biblical people. Lazarus is one of them!

✞      Lazarus is said to have traveled to Cyprus about 60 AD to escape the increasing Jewish persecution. He, according to tradition, was the first bishop of the See of Kitium in Cyprus. Some say he died in Cyprus and point to his tomb in that city.

✞      He then traveled to Marseilles, France where he became bishop for seven years. Some say he died in France and his crypt is there.

Both traditions tell us that many people converted to Christianity because of the witness of this kindly and zealous man! While traditions are not Scripture, we can take inspiration from Lazarus’ example and strive to have the kind of witness that will bring many to Jesus Christ! After all, we, too, have been raised from the dead! Paul wrote in Romans 6:3-5, 8, and 11:

…do you not know that so many of us as were baptized into Christ
Jesus were baptized into His death? Therefore we were buried with
Him through baptism into death, that just as Christ was raised from
the dead by the glory of the Father, even so we also should walk in
newness of life. For if we have been united together in the likeness
of His death, certainly we also shall be in the likeness of His resur-
rection….Now if we died with Christ, we believe that we shall also
live with Him….Likewise you also, reckon yourselves to be dead in-
deed to sin, but alive to God in Christ Jesus our Lord.

Live as one alive from the dead! Live as Lazarus Loosed!