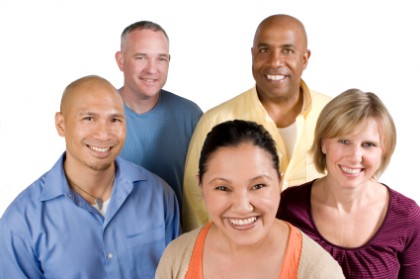 One Anothering has to do with how we relate to each other as Christians in the Body of Christ – the Church!  This study investigates the words one another in the New Testament as they apply to believers.  Although these two words are not in our featured Scripture, Acts 2:41,42, 44 and 45 gives us a wonderful example of One Anothering in the early Church!

Then those who gladly received…[Peter’s] word were baptized; and that
day about three thousand souls were added to them.  And they continued
steadfastly in the apostles’ doctrine and fellowship, in the breaking of
bread, and in prayers….Now all who believed were together, and had all
things in common, and sold their possessions and goods, and divided
them among all as anyone had need.

There are 32 words associated with one another applied to Christian fellowship in the New King James Version New Testament, and we covered the first four in Monday’s blog.  Let’s continue looking at them in descending order of the number of times they occur…

•      admonish [or admonishing] one another – two times (see Romans 15:14; Colossians 3:16).  The Greek word for admonish is νουθετέω (pronounced noo-thet-eh’-o).  Strong, in his Greek Dictionary tells us that it means “to put in mind, that is, (by implication) to caution or reprove gently….”  I think a key word here is gently.  Some people come in like a storm trooper, saying as it were, “This person is wrong!  And by God, I am going to set him straight!”  Paul is admonishing us in Galatians 6:1 and 2:

Brethren, if a man is overtaken in any trespass, you who are spiritual
restore such a one in a spirit of gentleness, considering yourself lest
you also be tempted.  Bear one another’s burdens, and so fulfill the
law of Christ.

And what is the law of Christ?  It is found in John 13:34:  “A new commandment I give to you, that you love one another; as I have loved you, that you also love one another.”  In Romans 13:8 and 9 the apostle says that such love “…has fulfilled the law…,” and “… any… commandment…[is] summed up in this…‘You shall love your neighbor as yourself.’  …love does no harm to a neighbor; therefore love is the fulfillment of the law.”

•      bearing one another – two times (see Ephesians 4:2; Colossians 3:13).  The Greek word for bearing is ἀνέχομαι (pronounced an-ekh’-om-ahee).  It means “to hold oneself up against, that is, (figuratively) put up with….”  Other Bible editions translate bearing as forbearing, putting up with, supporting, accepting, lovingly accepting, tolerant.  It comes to mind that the word in the Greek puts forth the idea that some folks are very easy to bear, accept, tolerate, etc.  But some people just seem to ‘rub you the wrong way’!  Even these we are to lovingly accept !  And that is not always easy!  Peter questioned the Lord about forgiving an offender:  “Up to seven times,” he asked? (Matthew 18:21).  He was being magnanimous!  The scribes and Pharisees taught that you only had to forgive someone for the same offense three times.  But Jesus said in Matthew 18:22, “I do not say to you, up to seven times, but up to seventy times seven.”  No wonder the disciples cried out in Luke 17:5, “Increase our faith! ”

•      This next word is out of frequency-of-use order, but the idea is very related to bearing one another (see above).  In Galatians 6:2 we are told to “Bear one another’s burdens….”  In the Greek the word is βαστάζω (pronounced bas-tad’-zo).  So it is a different word from bearing one another.  It means “(through the idea of removal); to lift, literally or figuratively (endure, declare, sustain, receive, etc.)….”  The thought conveyed takes me to Psalm 55:22:  “Cast your burden on the LORD, and He shall sustain you….”  The idea is that God will bear or carry whatever you cast on Him!  But it is you whom He sustains!  We are the burden cast upon Him that He carries! (See Isaiah 46:3, 4).  In that sense, we, as Christians, are to help carry one another!

•      exhort one another – two times (see Hebrews 3:13; 10:25).  The word exhort is παρακαλέω (pronounced par-ak-al-eh’-o).  Strong tells us the meaning:  “to call near, that is, invite, invoke (by imploration, hortation or consolation)….”  Jesus, in John 14:16 and 17, told His followers:  “…I will pray the Father, and He will give you another Helper, that He may abide with you forever, even the Spirit of truth….”  The ‘another Helper‘ is from the New King James Version (also translated such in six other versions I have).  But in six more it is called another Comforter, and termed an Advocate in one more.  The Holy Spirit is another Helper, Comforter, or Advocate just like Jesus – called near to help us! (See for instance Romans 8:26).  As a matter of fact, He is so ‘near’, the Spirit takes up permanent residence in every true Christian! (See Romans 8:9; I Corinthians 6:19).

How does this apply to one another as Christians?  As the Holy Spirit is called near to be a Helper, so we are to stand alongside of each other to exhort (help, lift burdens, implore, instruct, console) one another! (See Romans 12:8; Galatians 6:2; Colossians 3:16; II Timothy 2:2; Hebrews 10:24, 25).

More to come concerning One Anothering on Wednesday!