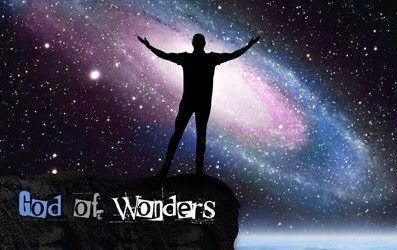 Hear, O LORD, when I cry with my voice! Have mercy also upon me,
and answer me.  When You said, “Seek My face,” my heart said to You,
“Your face, LORD, I will seek.”

•      …His wonders – “Remember His marvelous works which He has done, his wonders, and the judgments of his mouth…” (Psalm 105:5).  Closely related to His miracles, the Lord’s wonders are those great works in which He caused people to shake their heads in wonder!  Jesus tells us in John 14:9, “He who has seen Me has seen the Father.”  He is the perfect expression of God the Spirit (see John 4:24) wrapped in human flesh!  So let’s consider some of the great wonders the Lord Jesus Christ performed:

✞      Matthew 9:32 and 33 – “…they brought to Him a man, mute and demon-possessed.  And when the demon was cast out, the mute spoke.  And the multitudes marveled, saying, ‘It was never seen like this in Israel!’ ”  According to Strong’s Greek Dicitonary, to marvel means to wonder.  The multitudes had never seen anything like this before!  But consider, the last time God had broken through and even spoken to the Jews.  It was four hundred years before – through the prophet Malachi!

✞      Matthew 15:29 through 31 – “…Jesus…went up on the mountain and sat down there.  Then great multitudes…having with them those who were lame, blind, mute, [and] maimed…laid them down at Jesus’ feet, and He healed them.  So the multitude marveled when they saw the mute speaking, the maimed made whole, the lame walking, and the blind seeing; and they glorified the God of Israel.”

Assuredly, I say to you, if you have faith and do not doubt, you will
not only do what was done to the fig tree, but also if you say to this
mountain, “Be removed and be cast into the sea,” it will be done.
And all things, whatever you ask in prayer, believing, you will receive.

✞      Luke 8:23 through 25 – “…as they sailed [on the Sea of Galilee, Jesus]…fell asleep.  And a windstorm came down on the lake, and they were filling with water, and were in jeopardy.  And they…awoke Him, saying, ‘Master, we are perishing!’  Then He arose and rebuked the wind and the raging of the water.  And they ceased, and there was a calm.  But He said to them, ‘Where is your faith?’  And they were afraid and marveled saying to one another, ‘Who can this be?  For He commands even the winds and water, and they obey Him! ”

✞      John 3:7 – Even His teaching caused wonder!  For when Jesus told Nicodemus, “You must be born again,” the teacher of Israel (John 3:10 – implying that Nicodemus was, at that time, considered the premier teacher in all of Israel!), this well-trained Pharisee and member of the sanhedrin was astounded at the Jesus’ teaching!  And the Lord told Him, “Do not marvel that I said to you, ‘You must be born again.’ ”  Nicodemus should have known this truth!  For he was familiar with such Old Testament passages such as Ezekiel 36:26:  “I will give you a new heart, and put a new spirit within you; And I will take the heart of stone out of your flesh, and give you a heart of flesh.”

There are many more wonders in both the Old and New Testaments that God performed to the amazement of men!  These are just a few from Jesus’ earthly ministry.  If you want to experience a wonder, just go out into His creation, away from city lights, and look up at the stars on a cloudless night.  And as you contemplate God’s creation by Jesus Christ – “All things were created through Him and for Him.” (Colossians 1:16) – call to mind what David wrote in Psalm 8:3 through 9:

When I consider Your heavens, the work of Your fingers, the moon and
the stars, which You have ordained, what is man that You are mindful of
him, and the son of man that you visit him?  For You have made him a
little lower than the angels, and You have crowned him with glory and
honor.  You have made him to have dominion over the works of Your
hands; You have put all things under his feet, all sheep and oxen — even
the beasts of the field, the birds of the air, and the fish of the sea that pass
through the paths of the sea.  O LORD, our LORD, how excellent is Your
name in all the earth! (See Hebrews 2:6-9 as the writer applies this to Jesus).

We will finish up this series What Are You Seeking? on Friday.