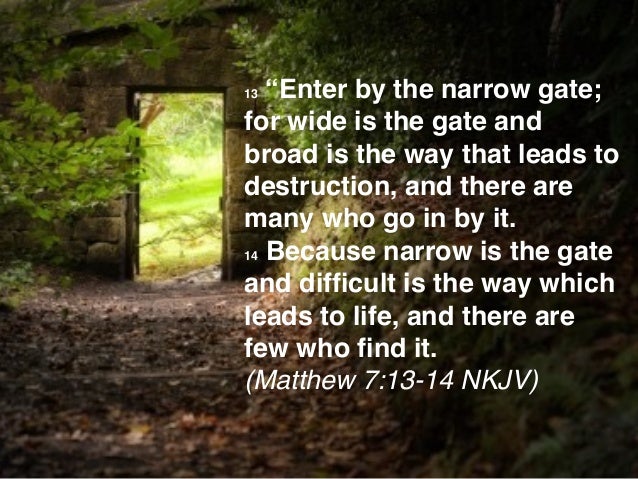 Ten blogs is enough to post concerning this theme of Two…. We could do many more, but this one is the last, and it covers several aspects of Two…. The featured Scripture I have chosen is Matthew 7:13 and 14:

There are Two gates, Two paths, Two ways, and Two destinations mentioned in these Two verses!

✞      We will look at the wide gate first. Why is it wide? Because there are many who go in by it ! These ones who go in by the wide gate are those described in Proverbs 14:12 and 16:25 (King James Version): “There is a way that seemeth right unto a man, but the end thereof are the ways of death.” I chose the King James Version because it (and several other versions I have) get the translation right! (See the blog from August 13, 2014 – Many Ways, One End!).

▸      “There is a way that seemeth right unto a man….” A person will only follow the one way because he or she has chosen it and decided it is the right way to follow! An individual person will not follow two different ways!

▸      “…the ways of death.” There are as many ways as there are individuals who follow their own way! They might answer a question concerning their faith (or lack of faith) by saying, “This is what I believe….”

✞      The narrow gate is just one Person wide! That one Person is the Lord Jesus Christ! He Himself said in John 14:6, “I am the way, the truth, and the life. No one comes to the Father except through Me.” He is not only the way, He is also the gate! For in John 10:9 (International Standard Version) He stated, “I am the gate. If anyone enters through Me, he will be saved. He will come in and go out and find pasture.” To enter into eternal life, you must come through Jesus!

✞      They are the broad way and the difficult way!

✞      The path to eternal death is described as being broad, entered by a gate that is wide. Though the end is hidden to most on that way, the way itself is inviting! James Hastings, D.D., writes in Great Texts of the Bible:

…when the gates are passed, we may well expect that there will be space,
and allowance, and freedom in the way. All kinds of persons may walk in
it. The man of the world may work out his schemes, gather his money, and
achieve his position. The pleasure-seeker may eat and drink and dance
and sleep and sing. The sensual man who kills his moral life and vilifies
the Divine image within him may pass on unchecked. The formalist may
count his beads and say his prayers. The Pharisee may draw his garments
away from the sinner’s touch. The sceptic may think his doubting thoughts;
and the crowds of persons who never think, who live without a purpose,
who do good or evil as the case may be, may all find a place here.

•      Two ways…. What is the difference between the paths and the ways?

✞      The paths are the road that is followed after passing through the entrance gate!

✞      The ways are the lifestyle that is manifested on those paths! For the sake of space, I will not reproduce the two contrasting lifestyles the Apostle Paul puts forth in Galatians 5:19 through 23. But I challenge you to compare the works of the flesh (verses 19 through 21) with the fruit of the Spirit (verses 22 and 23). Then choose the path you wish to follow, and the way you wish to live!

✞      The broad way leads to destruction! Whatever is lived for in this temporal life is turned to dust and ashes – destruction! (See Matthew 6:19; Luke 12:15-21; II Peter 3:10; I John 2:15-17). The Westminster Shorter Catechism gets it right with its first question and response:

“What is the chief end of man?”

“Man’s chief end is to glorify God, and enjoy Him forever.”

This chief end of man is destroyed forever in hell! Not only is their way – their lifestyle – destroyed (see Psalm 1:6), but people there are forever rendered totally ruined and useless to self, one another, God, and His kingdom! But this is to be expected if one follows the devil who is described as “The thief [who] comes only to steal and kill and destroy.” (John 10;10 – English Standard Version).

So choose Jesus Christ and His way! You life, now and forever, depends on it!