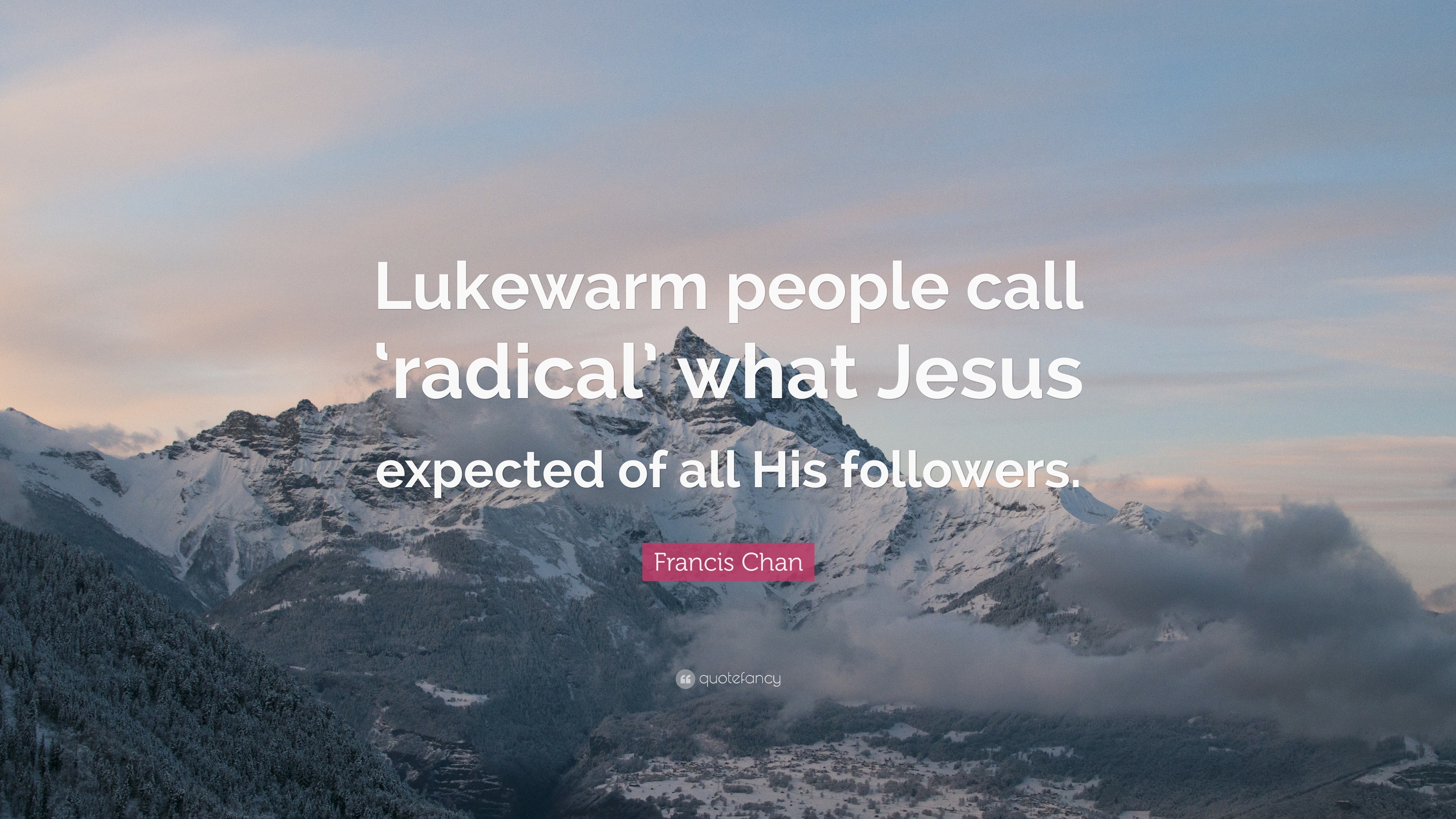 This blog is finishing the series of Three Options, the first two blogs posted on March 30 and April 2.

The third of Three Options in Revelation 3:15 through 17 is being lukewarm concerning the Lord Jesus Christ instead of being hot or cold:

I know your works, that you are neither cold nor hot.  I could wish you
were cold or hot.  So then, because you are lukewarm, and neither cold
nor hot, I will spew you out of My mouth.  Because you say, “I am rich,
have become wealthy, and have need of nothing” — and do not know
that you are wretched, miserable, poor, blind, and naked….

I find it interesting that Jesus said, “I could wish you were cold or hot…[instead of] lukewarm….”  Why?

✞      …we are not a Christian, and we have little or no interest in the things of God!

✞      …at least it is evident where we stand!  We need salvation, and to submit to Jesus’ lordship!

•      But if we are lukewarm in the Lord’s eyes, it is the worst condition of the three named in Revelation 3:15 and 16.  Why?  When one is lukewarm, it appears, at least from the initial confession, that one is a Christian!  However, they do not follow through with living a Christ-like life!

▸      The Jews were so disobedient concerning the LORD’s commands, others with whom they came in contact were turned off from the God of Israel!

▸      It brings to mind a man whom I tried to encourage to come to the first church I pastored.  He told me the names of several people who were regular attendees – even in positions of leadership – but their reputation was not very Godly!  Then he vehemently stated, “If that is what a Christian is, I don’t want any part of it! ”

✞      The New Testament gives us examples of lukewarmness.  Here are four:

▸      Matthew 6:24 – “No one can serve two masters; for either he will hate the one and love the other, or else he will be loyal to the one and despise the other.  You cannot serve God and mammon.”  Apparently, there were those who tried to serve both God and mammon!  Mammon is money and the things money can buy.

…those who desire to be rich fall into temptation and a snare, and into
many foolish and harmful lusts which drown men in destruction and
perdition.  For the love of money is the root of all kinds of evil, for which
some have strayed from the faith in their greediness, and pierced them-
selves through with many sorrows.

➨      In the prosperity and blessings of America (and much of the western world) today, this lack of all-out obedience is far too often a problem among those who name the name of Jesus Christ!

▸      Verse 17 of our featured Scripture shows the mammon attitude of these Laodician Christians:  “I am rich, have become wealthy, and have need of nothing.”  But they were lacking true riches only available from the Lord:

The tragedy is these lukewarm believers didn’t even know they were
“…wretched, miserable, poor, blind, and naked…”! (Revelation 3:17).

➨      Demas is mentioned in Colossians 4:14 and Philemon 1:24 as apparently a faithful follower of Jesus!  But according to Paul’s mention of him in II Timothy 4, he was a lukewarm Christian who loved this present world !

Have no love for the world or for the things which are in the world.  If
any man has love for the world, the love of the Father is not in him.
Because everything in the world, the desire of the flesh, the desire of the
eyes, and the pride of life, is not of the Father but of the world.  And the
world and its desires is coming to an end:  but he who does God’s pleas-
ure is living for ever. (See also Romans 12:2; II Peter 3:10, 11).

•      Being lukewarm in the mouth of the Lord Jesus makes Him sick!  He says in Revelation 3:16, “…because you are lukewarm…I will spew you out of My mouth.”  The Greek word for spew is ἐμέω (pronounced em-eh’-o).  According to Strong’s Greek Dictionary, it means, “…to vomit.”  A lukewarm Christian makes Jesus sick – sick enough to throw up!

✞      He would have us be hot for loving and obeying Him – first choice!

✞      He would have us be cold, total unbelievers, and acknowledge ourselves thus – second choice!

✞      He does not want us to be lukewarm – last choice!  For the world cannot tell where we stand!  And we will give the Lord God a bad reputation through our wishy-washy lives!

Chose to be hot for Him!